Imagine your city being awarded to host the summer olympics. Then imagine the olympic stadium being rebuilt into a baseball only stadium so your local ball club can move out of its outdated cookie cutter stadium.

Now, imagine your team playing in the new stadium for a decade less than they played in their old cookie cutter stadium. That’s exactly what happened with the Atlanta Braves.

SunTrust Park has been the Atlanta Braves home since 2017 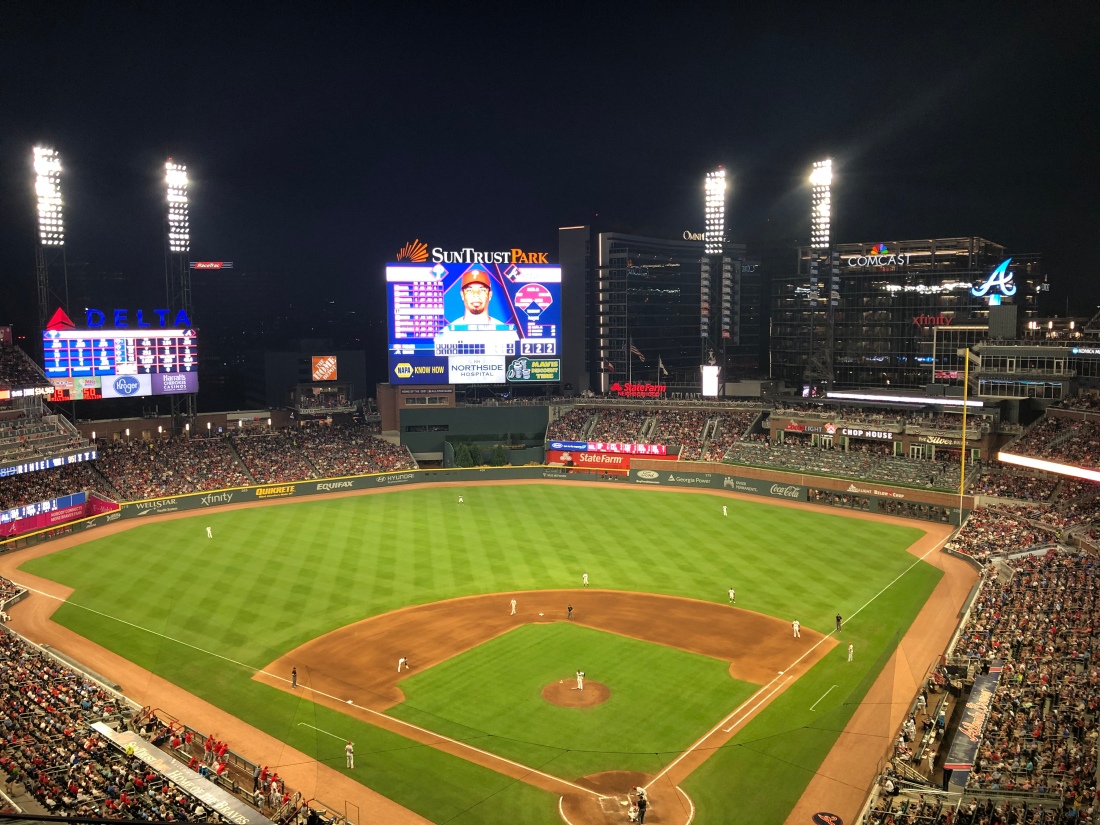 SunTrust Park, which opened in 2017, is the newest stadium in Major League Baseball until 2020. The Braves relocated to the state of the art ballpark in Cobb County, about 30 minutes north of downtown Atlanta after having played at Turner Field since 1997.

Turner Field had originally been built for the 1996 Summer Olympics before being turned into a baseball specific stadium. Despite its still relatively young age, the Braves would leave Turner after the 2016 season.

I made my first visit to SunTrust Park in the summer of 2019. Heading into the trip, I wondered about a few things regarding the ballpark. One of the first things I wondered about was the general location. How are things like parking? What about the public transportation since the ballpark is outside of downtown Atlanta? (There’s buses that get you kind of close)

The view from the Chop House in right field.

For parking, we didn’t have to worry about that since we took ride sharing to both games. I did notice there is parking (not cheap) however. If you are willing to fork over the money for parking, be sure to get there a few hours before game time to secure a spot. You can probably also buy a parking pass online if that’s your thing too.

The benefit of a ballpark being directly downtown is it gives fans plenty of options on what to do pregame wise, as far as food and drinks go. Since SunTrust is not in downtown Atlanta, what did the Braves do? They built The Battery.

A view of The Battery, where fans go to hangout before and after games. 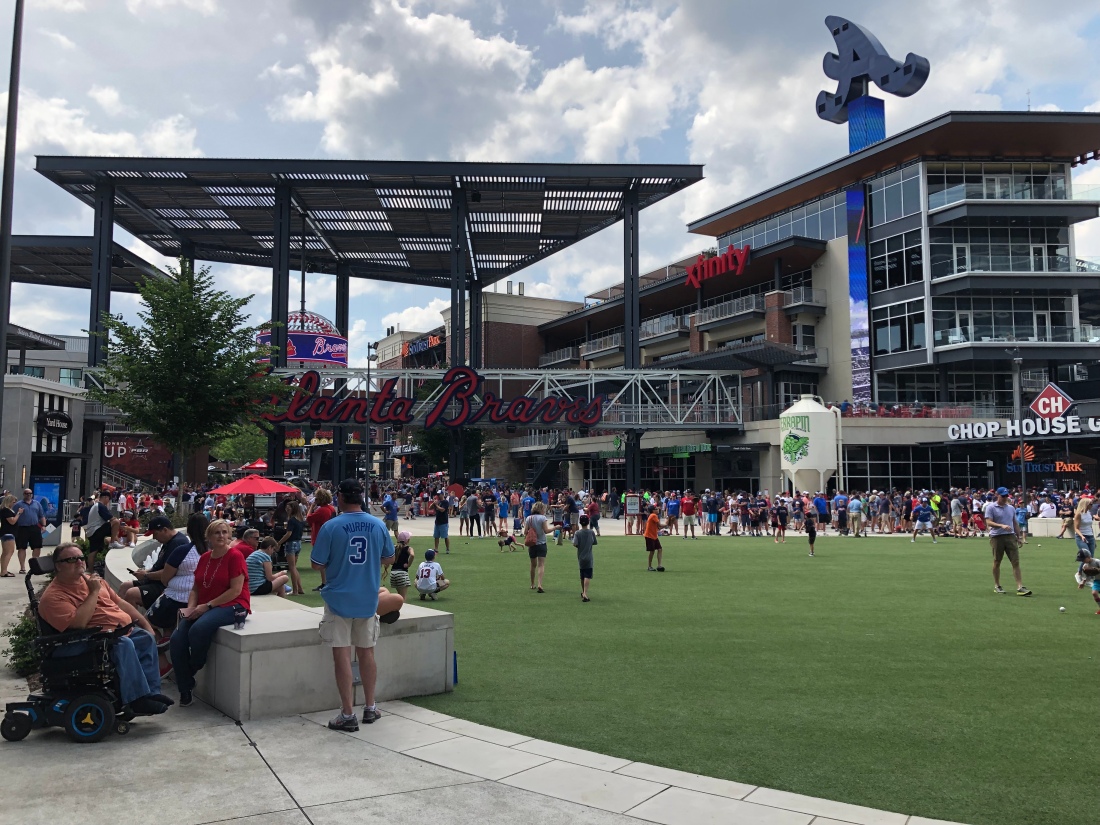 The Battery is the area directly surrounding SunTrust. It consists of apartments, shops, restaurants, and a variety of other entertainment options. Before every Braves home game, you can find fans all around The Battery having a good time.

People of all ages can enjoy The Battery. There are fountains for little kids to splash around and a green area for those that bring their baseball glove and want to play catch. The adults have plenty of options as well. There are more than enough dining spots and beer vendors to choose from. Fun fact, if you buy beer from certain stands, they’ll give you a wrist band so you can carry your beer into the stadium.

What about the stadium itself though? The first night I was there, we didn’t arrive at our seats until after the first pitch. Since I was exhausted from walking around Atlanta all day, I didn’t walk around the ballpark. Instead I just enjoyed an entertaining game where the Braves rallied late to walk off in the bottom of the 9th. It was the first time I felt the upper deck shake in a ballpark during a regular season game.

The next night was a Saturday evening game. During Saturday night games, the Braves will open the gates at 4:30 so fans catch the team taking batting practice (most teams open the gates after the home team has taken BP). This gave me plenty of time to walk and check out everything SunTrust had to offer.

The left field bleachers are a good spot to watch BP.

The first thing we did was take in a little BP. I stood back a little too far to have a chance at catching anything hit into the stands, but I don’t ever really feel like fighting a crowd for a batting practice home run. If a ball is hit in my direction and I’m lucky enough to have it land in my lap, cool. I’ll probably just give it to a kid anyway. They want it way more than me. For the record, if you take your kid to a game and they forget their glove or they don’t have one, SunTrust has multiple kiosks where you can rent gloves for free.

Rent a glove for your little ones. There are numerous features the kids can enjoy. 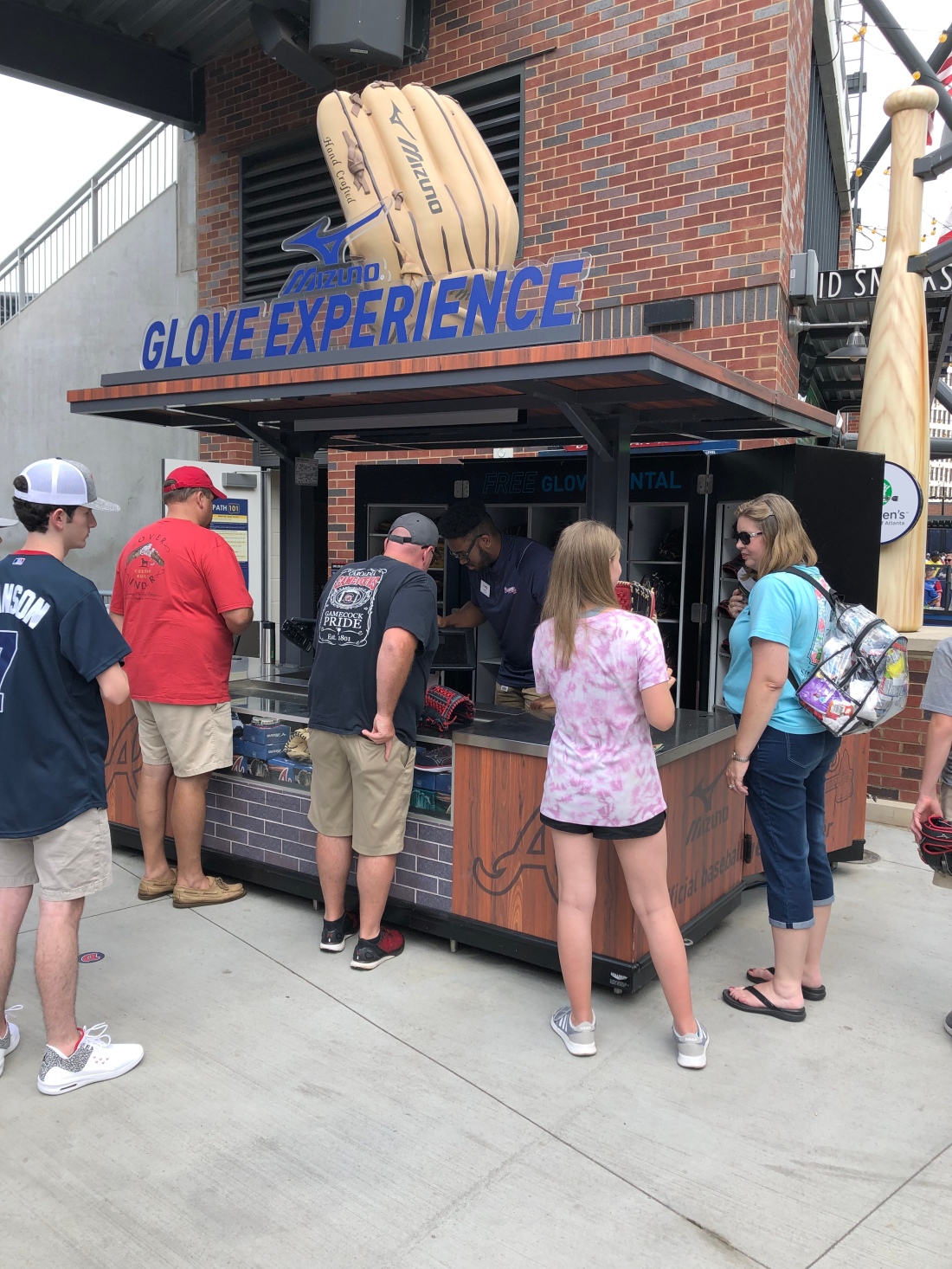 One thing I saw at SunTrust that I have not seen at other ballparks I’ve been to so far were sunscreen dispensers. In various parts of the concourse, you could get the necessary SPV protection if you were going to spend a good part of the game in the sun. So no need to remember to bring your sunscreen to the game.

While walking around, I noticed the concession stands had plenty of southern flair. There was everyone’s favorite fast food restaurant, Chick-fil-A, Waffle House (they sadly didn’t serve waffles), and plenty of other great choices. There are stands called Fry Box, and I got a Nashville hot chicken sandwich with a side of fries. The sandwich was actually pretty good. They also have seasoning stands for your fries too. The south just does food better, in my opinion.

I just had to season my fries.

If you are a Braves fan or just love learning about the history of baseball, be sure to check out the Braves hall/wall of fame. Located behind home plate on the main concourse, the team hall of fame honors past Braves greats and celebrates past team achievements. You can learn about the Braves from their start in Boston, to their stint in Milwaukee, and their time in Atlanta up until the present day. Their National League pennant trophies and World Series trophy from the 1990s are all on display too. 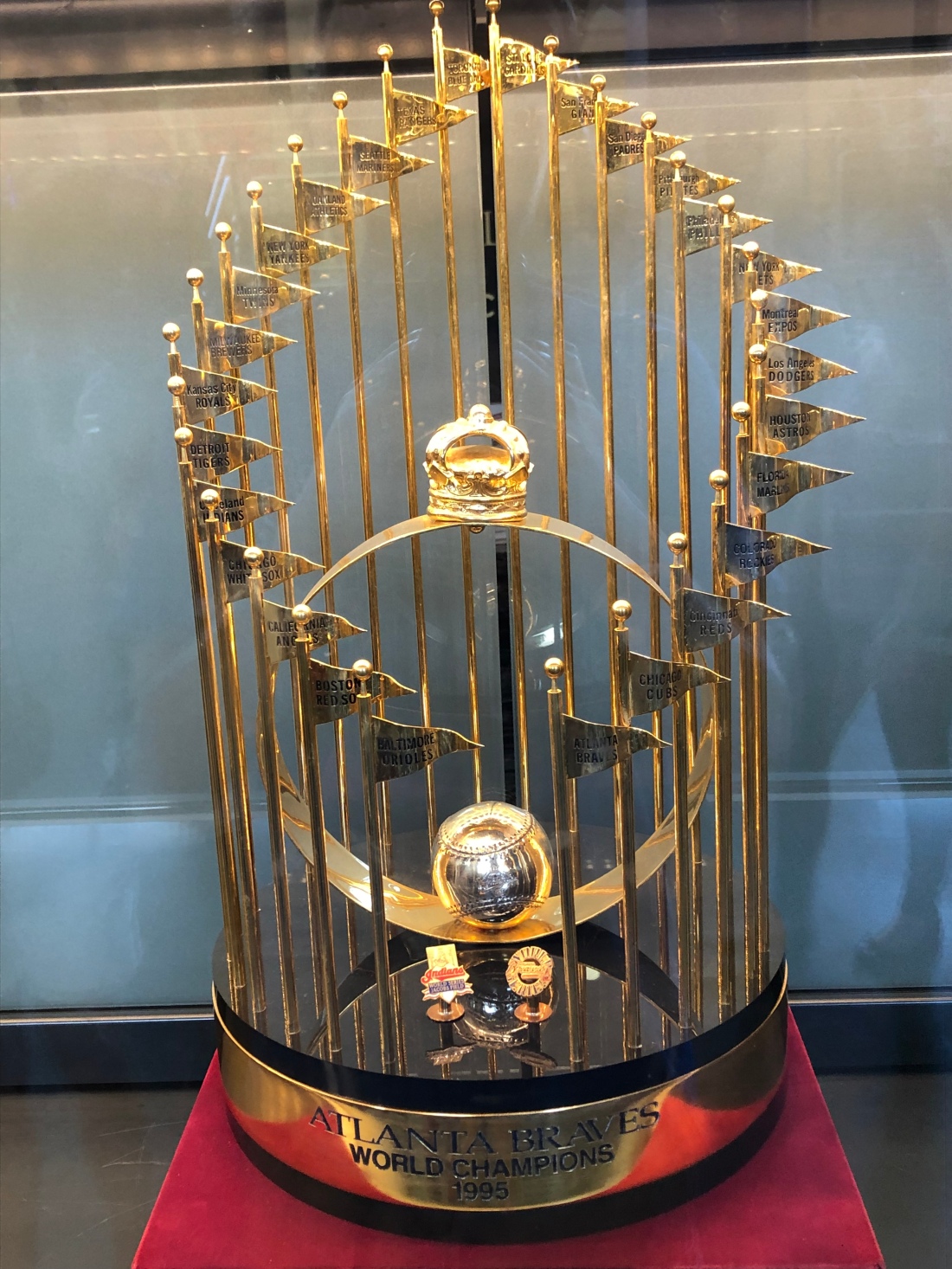 You can see Hank Aaron’s statue, 755 bats spelling out “755” for the number of home runs Aaron hit in his career, one of Greg Maddux’s Cy Young plaques, one of Dale Murphy’s MVP awards, and a number of other awards Braves players have won over the years.

Any trip to the ballpark can be improved by the atmosphere. When I went to Atlanta, the Braves were playing their division rivals the Philadelphia Phillies. Entering this series these two teams were 1st and 2nd in the NL East. After the Braves walked off on Friday night to earn their 8th straight win, fans flocked to SunTrust Saturday night anticipating more Braves magic.

What resulted was a then SunTrust attendance record of 43,593 fans showing up. Unfortunately, this time it was the Phillies rallying from a 9th inning deficit to win and send the hometown faithful disappointed. However, not before we got to experience the atmosphere of a sellout crowd that was on edge all night from playing a team they didn’t like.

The fans packed SunTrust Park when we were there.

If you ever go to a Braves game, prepare yourself for the Tomahawk Chop. I actually think it’s a cool thing they do. My only complaint was that they just overplayed it for a regular season game. In late game situations, it was neat to see the stadium lights dimmed and fans turn their phone flashlights on while doing the chop. Obviously the lights were dimmed when there was break in the game action.

Could you beat The Freeze?

I hope you enjoyed my review of SunTrust Park. I decided to write this a few days after getting back from Atlanta. Everything was still fresh in my memory, so now seemed like a good time to blog about so I could give the best details possible.

If you can find a way to get to SunTrust Park, I promise you will enjoy it. Be sure to get down there a few hours before first pitch. Enjoying The Battery pregame will help you improve your experience. I had a blast both nights I was there, and I can’t wait to go back. There isn’t a bad view in the ballpark. Plus, you can never go wrong with a little Chick-fil-A.